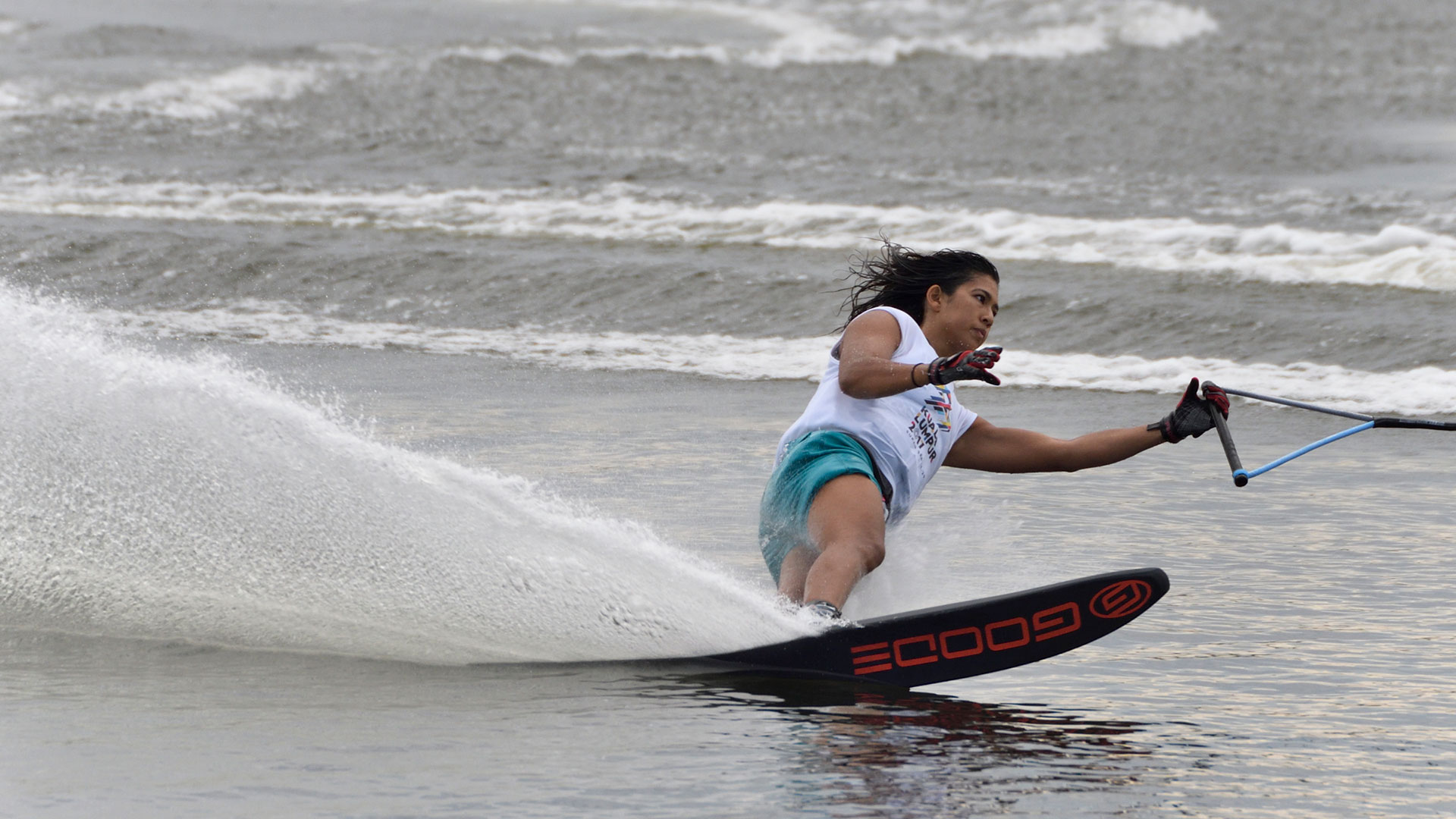 Photo by Samuel Dai
Tournament Waterskiing is similar to Alpine snow skiing in that it has different disciplines requiring special skills in each to achieve success.

An event that requires the skier to employ incredible strength and stamina, cat-like reflexes and an insatiable appetite for speed in order to succeed. The waterski slalom course consists of six buoys, set in an asymmetric S-shaped pattern with 3 buoys on each side. Unlike Alpine snow skiing, the waterski slalom courses' dimensions are exactly the same whatever the venue. With the tow-boat being driven exactly through the middle of the course, the skier endeavours to round all six buoys to constitute a clear pass. After each clear pass, the boat speed is raised in increments of 3 KPH. When a clear pass has been achieved at the maximum speed of 58KPH for Men and 55KPH for Women, the rope is shortened down in length.

This continues after each clear pass, thus making the task of achieving the required width to round each buoy more difficult. Any failure to round the buoys or a fall ends the competitors' set, with the number of buoys (or fractions thereof) totalled up to produce the skiers' score. Skiers in the highest divisions ski with incredibly short ropes, with the top competitors skiing on ropes that don't even reach out to the width of the buoy from the boat path. Here, the skier has to use the length of his/her body and his/her skill to effectively make up the deficit. Eventually, though, the skier has to fail (or fall).

Requiring the balance of a feline coupled with the explosive motion power of a dragster. Performing under the immense pressure of instant failure. The tricks discipline in its simplest description.

The most gymnastic of the three tournament disciplines, the skiers each have two 20 second runs in which to perform as many turns or "tricks" as possible. Each trick has a predetermined point value, defined in terms of difficulty. Thus, a more difficult trick earns more points. Each trick is carefully watched over by a panel of five judges, whose task it is to make sure that each trick is performed correctly in accordance to the rules and to then mark down on a score sheet.

After the skier has performed his two runs, the judges hand over their score sheets to a calculator, who awards the points for each trick performed based on a majority of 3 judges or more. Adding up all the correctly performed tricks produces the skiers' score and the one with the best total is declared the winner.

The tricks themselves vary, from a simple turn to the side (the side-slide) right up to the more difficult somersaults (or "flips"). The top skiers have the ability to combine two, three or even more somersaults of various rotations in one 20 second pass, spending almost as much time in the air as on top of the water. The other run is traditionally used to perform tricks with the rope attached to the foot that's not riding on the ski (toe-tricks)!

The least complex of the three events to understand - and the most dangerous to perform. An event that demands strength, an appetite for speed and not least a large amount of bravery from the skiing athletes.

Quite simply, the skier has three attempts at the jump ramp to fly as long a distance as possible and ski away from the ramp. Should a skier fall at any time during the attempt or refuse to ride over the ramp, the attempt is scored as zero and the skier only has the remaining attempts out the three allocated left to register a score.

Skiers have a choice of three ramp heights (1.5 metres, 1.65 metres & 1.8 metres high) and several boat speeds (up to a maximum of 57KPH). However, the boat's speed is sometimes not enough to generate any significant distance off the ramp, which necessitates the need for the skier to take a pendulum style approach to the ramp. This can result in speeds of over 96 KPH being generating by the athlete before impacting the ramp.

To take full advantage of this increased speed, the skier has to gain altitude by straightening the legs on the ramp. The timing of this technique's implementation is critical - the ski jumper spends less than 0.02 of a second on the ramp's slick surface!

In a stark contradiction to a similar event in snow skiing, Women can compete in water ski jumping. They have had to be content with jumping at a ramp height of either 1.5 metres or 1.65 metres, but their maximum boat speed is 52 kph.

For safety reasons, skiers are compelled to wear a crash helmet and wetsuit body-armour before taking part in this sometimes hazardous event. On the same grounds, skiers under the age of 12 are restricted from competing in this event.

The distances achieved can be incredible: the women's' world record has been measured at over 60 metres (the women's record currently stands at 60.3 metres) whilst distances of over 65 metres are not uncommon amongst the world's elite male competitors (the men's record stands at 77.4 metres).