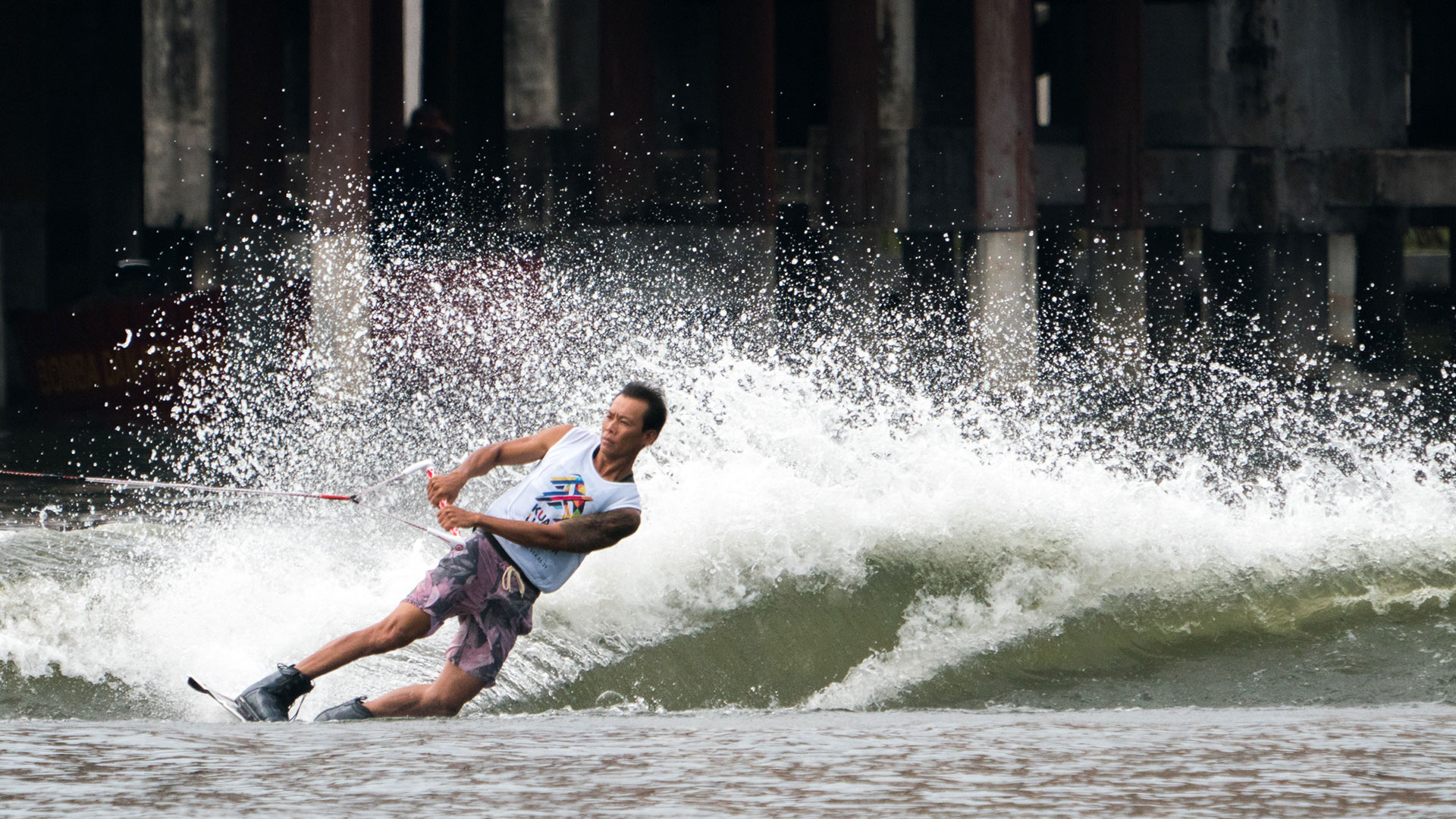 Photo by Knight Ong
Wakeboarding is a combination of waterskiing, snowboarding and surfing. Each rider is allowed 2 passes through the wakeboard course during which time they may perform any routine they choose. They will be judged on three subjective style categories: Execution, Intensity and Composition. Riders are encouraged to perform a smooth flowing routine with a wide variety of tricks. Each manoeuvre should be executed as cleanly and high off the water as possible.

How It All Began

Wakeboarding is a dynamic watersport that truly started in the late 80s and today is the fastest-growing sport worldwide. Akin to snowboarding, the sport's popularity is spreading like wildfire around the globe. Evolving from a combination of surfing, snowboarding, skating and waterskiing, wakeboarding is not only the world’s fastest-growing water board sport but also the most accessible.

You can enjoy wakeboarding on lakes, rivers or on the sea. Riders are able to perform awesome BIG AIR tricks, whilst being towed behind a boat, with the use of larger wakes. The rider stands sideways on a shorter, wider board similar in concept to a snowboard. By travelling at a lower speed than in waterskiing and by carrying extra weight (and a compliment of cheering friends), the boat kicks up a big wake. The rider uses this wake as a launch ramp where a variety of tricks are performed. These can range from skate/snowboard inspired grabs and spins to massive flips and soaring jumps. In the same way that snowboarding has brought a cultural revolution to the snowski market, wakeboarding has redefined and reinvented waterskiing.

What was once a sport enjoyed by a small group of pioneering individuals, wakeboarding is now a hugely popular global pastime with its own unique attitude and style. Because of its emphasis on freestyle creativity, wakeboarding has an attitude, exuberance and energy that is synonymous with its irreverent style and cultural position. Like other exciting, technically progressive sports taken up by forward-thinking trendsetters, wakeboarding has many followers who don’t necessarily practice the sport but really get into the spirit and flavour of its lifestyle. In wakeboarding, there are no hard landings to put off the beginners from learning or the professionals from pushing their personal limits to invent new tricks.

You will see from early photos taken in 1965, a selected few waterskiers looking to chill out and ride took to throwing a surfboard in their ski boat with a few buddies for wake, little did they know that 40 years later, surfboards with bindings known as wakeboarding would be so massive, you have only got to look at the waterways to see this.

It seems little happened between 1965 and 1979 until Tony Finn from California really grasped the concept, strapped boots to the board and invented wakeboarding. At the same time as Jimmy Redmon was doing the same thing in another part of the US.

The “skurfer” was born out of surfing frustration. When there were no waves, the surfers could get towed behind a loaded-up speedboat whose increased wake provided some surf-style relief. In those days, the lumbering “skurfer” would be surfed on the wake, but as the years went by, lighter more manoeuvrable symmetrical boards were developed and the wake’s role changed from wake to launch ramp. In the early 90s, the sport now known as “wakeboarding” encompassed influences from snowboard and skate scene.

Over the years we have seen the introduction of obstacles such as sliders, funboxes, kickers and flat bars. This adds another dimension and element to the sport, similar to skate and snowboard and skate scene. The sport made its appearance in Europe in the early to id eighties, with the French surfers and snowboarders riding on the sea in the French Riviera. The sport has since grown rapidly worldwide and enjoys massive media coverage with events being held in exotic locations around the world.

Today boats are specifically built with wakeboarding in mind with 65-70% of waterski boats being constructed with wakeboard towers attached, improving the lift off the wake for riders.

Of late we have seen a variant of wakeboarding in the shape of wakeskate and wakesurf, just adding to the boarding community on the waters.

History of Wakeboarding in Singapore

Ever since the SWWF invited Professional Wakeboarder Dean Lavelle to launch himself up in the air, throwing somersaults at Kallang Riverside Park in 1996, wakeboarding has become one of the fastest-growing watersports in Singapore.